The Catholic Church in Bollington was established by Fr John Hall, from Macclesfield, in 1830. This was a time when the local Catholic population was expanding rapidly as a result of the influx of Irish families to work both in the mills and on the construction of the Macclesfield Canal. Fr Hall rented two cottages in Bollington, which served both as church and school.

The chance to build a permanent church came in 1834, when William Turner of Shrigley Hall donated land to both the Anglicans and the Catholics. As a result, St Gregory's chapel was built off Chapel Street (photo left, courtesy of Discovery Centre). 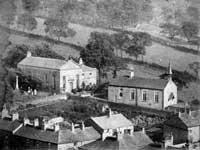 Fr Hall continued to minister to Bollington from Macclesfield until the first resident priest arrived in 1845. In 1866, a row of cottages in Chapel Street was converted to form St Gregory’s school (photo right, courtesy of Discovery Centre).

In 1952, Fr Thomas Osbyrne arrived in the parish. He is described as 'perhaps the most dynamic of all Bollington's parish priests'. In 1957, he demolished the original buildings and built the present church and presbytery on Wellington Road. The cemetery remained in Chapel Street. In 1962, he built a new school in Albert Road and converted the Chapel Street premises back to cottages. He erected an ex-army hut behind the church to serve as a parish hall.

Since 1981, at the request of the Diocese, the parish has been served by the Salesians who also run Savio House – a retreat centre for groups of young people and adults in the countryside just outside Bollington.

In 2017, the parish will celebrate the 60th anniversary of the consecration of the current church.